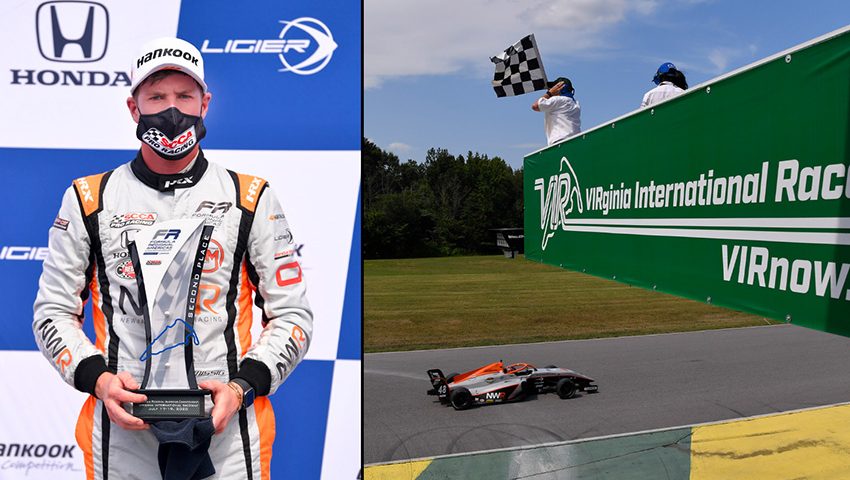 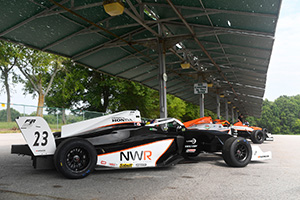 Alton, VA (July 19, 2020) – Newman Wachs Racing and its driving duo of Brazilian Victor Franzoni and American Jordan Missig traveled to the picturesque VIRginia International Raceway on the July 17-19 weekend for rounds three, four and five of the Formula Regional Americas Championship Powered by Honda. Missig led the squad, scoring his first career series podium with a breakthrough run to third place in the opening event of the tripleheader, which was NWR’s second podium of the season. Franzoni followed up Missig’s performance with three top-six finishes to advance to third in the championship standings.

“As a team, we had some great results,” offered Brian Halahan, NWR Team Manager. “However, we also made mistakes that affected both drivers’ finishing results. The guys ran at the front and had to come from behind on multiple occasions, but I believe we have strong cars and both drivers proved they could come through the pack. I am very proud of my crew, as they all work their tails off all weekend long. I’m very much looking forward to Barber in just under two weeks.”

The Formula Regional Americas Championship series took to the track at VIR on the Thursday for four unofficial tests. Friday began the official weekend with two practice sessions in preparation for their three-race weekend. The Virginia weather proved to be tough on the crew, drivers and cars as the heat index actually caused both cars to suffer power issues due to ECU overheating. Franzoni and Missig started Saturday morning off with their lone qualifying session, Missig ran a stellar lap that put him P2 on the starting grid, while Franzoni earned the eighth position for Race 1. Later that afternoon, Race 1 took place in the highest heat of the day. Missig, 22, would immediately begin fighting for the top-five positions and, after a hard-fought battle, finished on the podium for his first time in his FRA career. Franzoni, 24, got to work right away fighting with an incredibly talented pack of drivers and in the end, he came home in the sixth position.

Sunday got underway early in the morning with Race 2. Jordan began the race just as he did in the opening battle, fighting with the top names of the series, however, two off-track incidents midway through race in the tricky turns of 12 and 17 caused him to fall down the order. He consistently set fast laps trying to come back through the field, but he ran out of laps and carded a 14th place finish. Victor kept up his consistency while still learning the long 17-turn track, as this was his first race at the challenging venue. After starting P9, Franzoni was able to snag three more positions, all while battling the ECU issues, giving him a sixth-place finish. The final race of the weekend was run in the late afternoon on Sunday. After both young drivers had off-track excursions early that caused them to fall to the tail of field, Franzoni immediately showed his open-wheel experience by working his way through the field and with one restart at the end, on extremely flat spotted tires and some shifting issues, he made an incredible pass to grab P4. Missig would follow Franzoni, moving up through the field, grabbing his third top-10 of the season with an eighth-place finish.

The team will now use the next week and a half to prepare the cars for the next race, which will take the team to Barber Motorsports Park in Alabama on the July 31-August 2 weekend.

Driver Quote: “The weekend was very positive for us. We have learned a lot and we’re definitely going in a positive direction for the rest of the season. I didn’t manage to get on podium at VIR, but my teammate did and that was awesome. I can’t wait for the next round at Barber. I’m really enjoying being part of NWR family and I really want to bring a win home as soon as possible.”

Driver Quote “VIR was a really good weekend for me. It was a weekend where I could really see where I stand among the rest of the field. It was awesome to be able to stand on the podium in Race 1 and I look forward to being on the podium more at our next race at Barber Motorsport Park”.