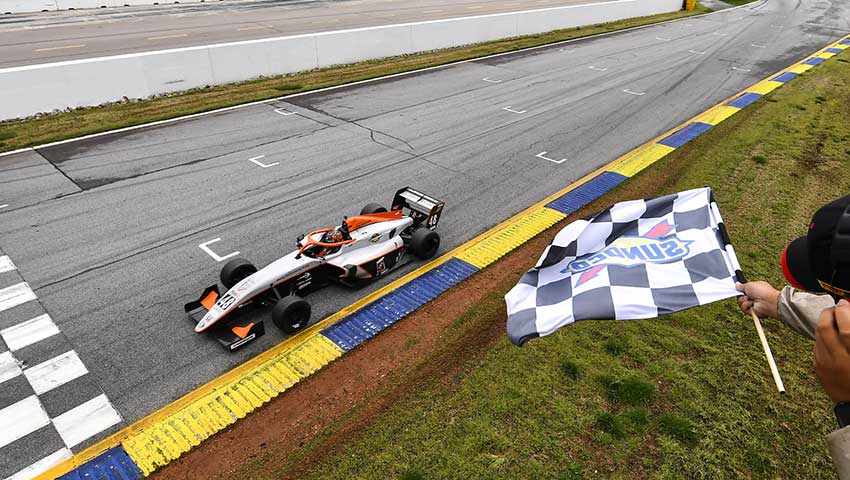 BRASELTON, GA (March 28, 2021) – After the long winter break, the Newman Wachs squad came out swinging at Michelin Raceway Road Atlanta this past weekend to score two podium finishes with Jordan Missig in the opening round of the 2021 Formula Regional Americas season. The weekend proved to be a bit challenging as the weather couldn’t decide if it wanted to rain or let the sun shine, but the NWR team prevailed despite the conditions as Missig snagged two podiums, building off the development and growth he enjoyed in 2020. Missig finished in the top-five of all three races, taking fourth in the opener, third in the second race, and a career best second in the final races of the weekend. Unfortunately, new NWR driver Ian Rodriguez had an off-track excursion in Race 1 that damaged his car and ended his weekend prematurely after a promising start.

“Overall, the team had a good weekend,” offered Brian Halahan, NWR Team Manager. “Jordan has been working very hard in the off-season and it showed with his results this weekend. I’m proud of his two podiums and even more so of his highest FRA finish. Unfortunately, Ian was unable to finish the weekend due to an off in Race1. He will now regroup during this month and a half break and come back strong at Road America. The team did a fantastic job and I’m looking forward to the next race.”

The Formula Regional Americas Championship series took to the iconic Braselton, GA road course on Thursday for three unofficial practice sessions in preparation for Friday’s official practice, which was followed by the drivers single qualifying session to set the field for the weekend’s triple header. Saturday morning the team woke to a dry but green track after overnight rain. Missig started on the inside of Row 3, and after a massive start, he jumped into the fourth position during the first lap. While in a heated battle, Missig was turned by another competitor, causing him to fall back to ninth. Jordan did not let up and pushed hard and was the fastest car on the track over the second half of the race. In the process, he climbed back to finish fourth. Rodriguez started eighth and put his head down, working steadily towards the front, eventually advancing his way up to the fifth position. Unfortunately, after an off-track excursion, Ian was forced to retire from the race and ultimately from the weekend.

Saturday afternoon brought on Race 2 where Jordan would start from the third position. After a massive start, Jordan launched himself into the lead and continued to hold the point until about the halfway mark where he would make a technical mistake, dropping him back to fourth. He was able to climb back to third where he would finish the race. Sunday morning, the team woke up to heavy rain, but by race time the track had dried. Jordan started from the outside of the front row and launched well, slotting into second after the opening lap chaos. The rain returned at the halfway point to dampen the track, which started to work in Missig’s favor. Jordan continued to push, catching the leader, but time would eventually run out and despite not being able to challenge for the win, he still secured his highest career finishing in second.

The team will now turn their focus on the next event on the schedule at Road America on May 14-16 and armed with the momentum and confidence from Missig’s performances at Road Atlanta, they will be gunning for their first series victory.

Driver Quote: “We had a very good start to the season, coming away with a fourth in Race 1 after having an incident early on in the race, and two podiums for Race 2 and 3. The car was fast all weekend long and I have to thank Brian Halahan and the guys at Newman Wachs Racing for putting together such a good car. I can’t wait until our next race at Road America, where I will look to get my first win of the year.”