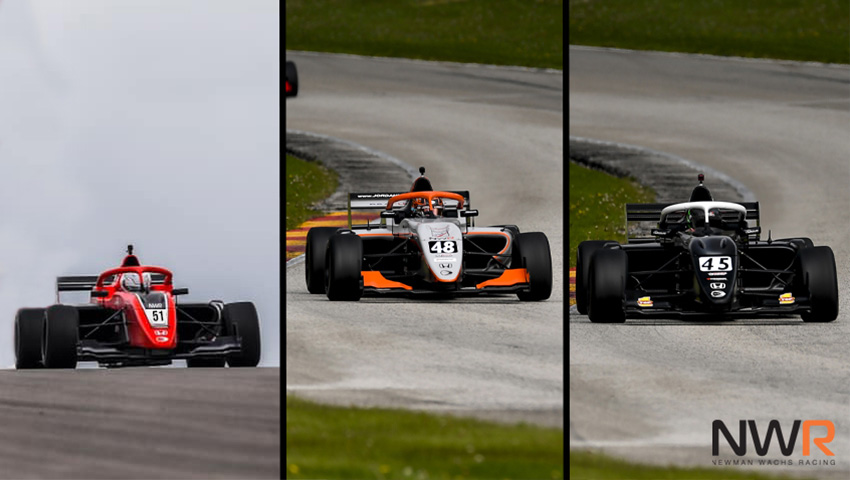 MUNDELEIN, IL (June 24, 2021) – It’s been only a month since the last three rounds of Formula Regional Americas Championship Powered by Honda, and with the next event coming this weekend, Newman Wachs Racing will re-fire their competition program as they head to Mid-Ohio Sports Car Course on June 25-27. The series will take to the track for three rounds on the undulating 15-turn, 2.4-mile purpose-built road course. The team is coming off a successful outing at Road America, where they grabbed three more podium results, including two second-place finishes by Ian Rodriguez. After a somewhat trying weekend for Jordan Missig during the last two rounds, the American looks to bounce back and gain much needed championship points. Kentucky’s Jacob Abel will be joining the team this weekend as a third entry for the NWR squad. Abel ran the entire 2020 FRA season and is looking to leverage that experience to challenge for race wins.

“It’s great getting back to the track with my NWR crew,” commented Team Manager Brian Halahan. “The drivers have been able to score podiums at the first two races, so I’m looking forward to being back up on the podium again this weekend. I’m also happy to have Jacob Abel and Abel Motorsports teaming up with us. He has a year’s worth of experience in these cars, so I expect him to do well. He’ll also adds another stream of valuable data throughout the weekend.”

The drivers will participate in two unofficial test days on the Wednesday and Thursday (June 23-24) leading up to the event. Friday’s schedule (June 25) includes one official practice session in the morning, followed by qualifying at 2:25 pm ET. Saturday will kick off the tripleheader with Race 1 at 9:40 am. Sunday will begin with Race 2 in the morning at 9:40 am, followed by Race 3 at 4:55 pm. Live timing and scoring will be available on the series website (www.framericas.com) and the Race Monitor app. Live video will be provided on the SVRA app for the three races.

Quote: “This weekend at Mid-Ohio is a ‘redemption weekend’ for me after what happened last time out at Road America. We are approaching the halfway point of the season and points this weekend are a must if I want to keep my championship hopes alive. Look for me to make a big impact on the weekend.”

Quote: “I am very happy to be back in the car this weekend! I thank God for the opportunity! I’m sure that it’s going to be a very good weekend with NWR!”

Quote: “I’m really looking forward to getting back in the FR Americas car at Mid-Ohio this weekend, working with Newman Wachs Racing. Brian Halahan has put together a great group of people for the FR Americas program and I think a couple people from our team and I will fit right in. I can’t thank Brian and the whole team enough for taking us in with open arms, I’m ready to hit the ground running and contest for race wins!”

Newman Wachs Racing was formed in 2005 by late actor and IndyCar team owner Paul Newman and his long-time racing friend Eddie Wachs to aid the development of young drivers in Champ Car’s Cooper Tires Presents the Atlantic Championship Powered by Mazda. Drivers who have been part of the NWR program included John Edwards, Simona de Silvestro, and Victor Franzoni. After a seven-year hiatus, Newman Wachs Racing has returned to racing, competing in the Cooper Tires USF2000 Championship on the Road to Indy Presented by Cooper Tires. The team added the Formula Regional Americas Championship Powered by Honda to their resume in 2020.

Possible Caption: Newman Wachs Racing heads to the beautiful sights of the Mid-Ohio Sports Car Course in hopes to continue its success from the first two weekends (Photo: Gavin Baker)