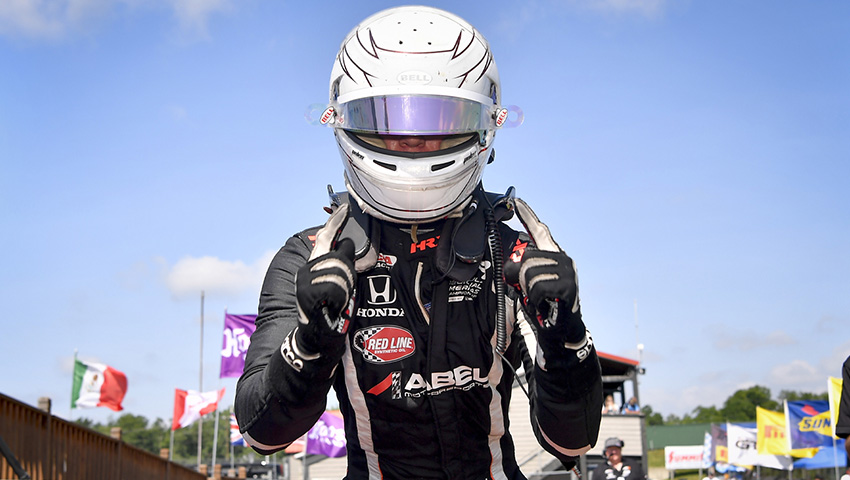 Jacob Abel drivers to his first win for NWR with Abel Motorsports, giving the team their eighth podium of the season

LEXINGTON, OH (June 27, 2021) – After the six-week break since Road America in May, the Newman Wachs Racing squad came out swinging at the 15-turn, 2.4-mile purpose-built Mid-Ohio Sports Car Course, scoring its first win of the 2021 Formula Regional Americas Championship season with Jacob Abel, who competed with the team. Inclement weather affected the opening days of the event and consequently wound up canceling the one and only qualifying session, which resulted in the drivers lining up for Race 1 by their fastest practice times. Kentucky’s Abel, running under the ‘Newman Wachs Racing with Abel Motorsports’ banner, was consistent throughout the weekend as he topped all the charts ahead of a second-place finish in Race 1. Abel backed up that result with a big win in Race 2, which was the first for both Jacob and Newman Wachs Racing. Guatemala’s Ian Rodriguez came up to speed throughout the event and ended the weekend with a top finish of fifth, although he also ran in the top-five in Race 3 before an incident. American Jordan Missig had a great start to the event, getting his fourth podium of the season with a third-place performance in Race 1, but that was the high point as he encountered troubles in Race 2 and Race 3.

“I’m really happy to finally get our first win in the FR America series,” offered Brian Halahan, NWR Team Manager. “We have been so close over the last year and we finally got one. I knew bringing Jacob in that we would have a chance for wins and pole positions, and we got both. I’m really proud of what he did, just stepping in without being in the car since the last FR race of 2020. Jordan again had a bit of an up-and-down weekend, finishing third in two different races, but after a few post-race penalties in Race 3, we lost that podium. Ian had a bit of a struggle over the course of the weekend with car set-up and learning a new track. I believe if it was not for an on-track incident in Race 3, he would have been on the podium. However, it was a pretty good week and I’d say a pole position, one first, one second, and one third are great results. We now move forward to the next event where we will be back down to just two drivers, but I hope to have Jacob back for a couple more events.”

The Formula Regional Americas Championship series took to the beautiful Mid-Ohio Sports Car Course on Wednesday and Thursday for seven unofficial practice sessions in preparation for Friday’s official practice. This was supposed to be followed by the drivers’ single qualifying session to set the field for the weekend’s triple header and Race 1. However, qualifying was canceled due to rain. The grid for Race 1 was set by their practice times earlier in the morning. As a result, Abel rolled off P2, Missig P5 and Rodriguez P6 for Saturday morning’s opening race. Saturday’s schedule consisted of only one race of the tripleheader. When the lights flashed to start the first race, Jordan had a huge start as he launched himself into third ahead of Abel, however he wasn’t able to hold off Jacob for long. The two would work together, moving themselves up to second and third, which is where they would finish. Ian had a great start, but he unfortunately got collected in an incident involving a car in front of him, which would require at trip to pit lane for a new front wing assembly. He was able to continue, one lap down, giving him an 11th place finish.

Sunday morning brought on Race 2 of the tripleheader. Immediately from the race start, Abel took the lead and never put a wheel wrong throughout the entire duration, even after a full-course yellow, giving him his well-deserved first win. Rodriguez continued to fight for a top-five finish, but after getting tapped mid-race into an off-track excursion, he held strong, finishing sixth. Unfortunately, while moving up through the field, Missig had to make an evasive maneuver to avoid a spinning car and his NWR machine was damaged in the process.  The contact ended his race.

The final races of the weekend took place later in the afternoon. Abel started on the off pole, but unfortunate engine failure going into Turn 1 at the green flag ended his run early. Ian and Jordan were driving hard and were in the top-five, as Jordan was coming through the field. However, when trying to overtake for position, Missig made contact with the car in front of him as he slid through to take the position. After finishing third on the race track, a resultant penalty from the contact dropped him down to the tenth position. Ian suffered contact during the race, dropping him to sixth, which is where he would finish.

The Newman Wachs Racing crew will be back on-track at Brainerd International Raceway in Minnesota on July 16-18.

Driver Quote: “The weekend out at Mid-Ohio went fairly well. We showed some decent speed but just couldn’t get the track position in the final two races of the weekend, although I did manage to make my way up through the field in the last race of the weekend. I want to thank everyone at Newman Wachs Racing for getting my damaged car from Race 2 ready for Race 3.”

Driver Quote: “It was a difficult weekend for me; we didn’t find a good balance in the car. I want to thank God, my family, NWR and my sponsors for the big work that they put in. We will do better at Brainerd!

Driver Quote: “All in all, it was a very successful weekend for the Newman Wachs Racing with Abel Motorsports crew! To be one of the fastest cars in every single session all weekend was super impressive considering this was a one-off effort. I’m thrilled to help get Brian and his crew their much deserved, first win in the FR Americas series. For me personally, it was a great weekend to build on the momentum that has been steadily gaining for the past few weeks. This win was my first in two years, so it’s really good for my confidence moving forward and I’m super thankful for everyone’s help. Hopefully, we will be able to work together again soon in the future!”